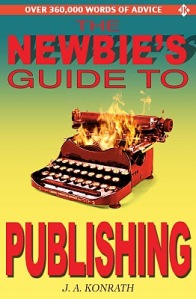 Title: The Newbie’s Guide to Publishing

Summary: Lots of everything, including, honesty, good advice and value

This is an oddball book in many ways. First of all, it wasn’t really written as a book, but as an inexpensive ($2.99) Kindle compilation of J.A. Konrath’s blog posts from his excellent publishing blog. Over the last 5 or more years he’s written a lot of posts (500+), and this book is an excellent way to read/skim them quickly. I don’t begrudge him the extra $2.99. Raw as it is, the information and convenience of the format are worth far more. The book provides excellent value.

This book is also very long, perhaps 1,000 pages if it were a printed volume. It covers a vast array of topics involving writing and publishing. Tips on writing itself and motivation (other books cover much of this). A invaluable (and rare) first hand look at one writer’s career. Tips on on traditional publishing, getting an agent, and vast (I mean vast) tips on self promotion. It also, and very interestingly, chronicles Konrath’s evolving perception of the publishing business. From how to make it as a mid-list conventional author to an increasing rejection of traditional publishing’s broken business model. In this regard, it does taper off around 2010, midway through the current beginning of the e-book revolution. I’ve been reading his blog for a while, so I’ve probably read most of the posts since as he becomes ever more e-book centric in his thinking, but I would like them arranged in this easy format (i.e. JA, throw those in next time you update the book).

The book isn’t without flaws. It’s full of redundant posts, and many that aren’t applicable anymore, or to a particular writer’s interests or needs. Still, these are easily skimmed and skipped, and this doesn’t diminish from the overall value and usefulness. I don’t know how Konrath the novelist is (I bought Whiskey Sour, but haven’t read it yet), but as a analyst, he shows a keen mind and perceptivity, unusually clear and objective in his thinking. A very practical guy who looks at the situation as it is, and what’s likely to happen regardless of what entrenched institutions want. This alone is rare, but he also has an energy level that seems high to even super-manic me. The guy did a single promotional tour with 500 book signings! And he brings this level of commitment to every part of his work. Plus, he records, documents, and analyses stuff that few ever would. For example, he tries to reach some analytic conclusions on the sales effect of book signing and touring. He also includes useful logs of his own experiences with various phases of publishing (like the period from finding an agent to the book release — long!). The challenges, luck, and work required to succeed in this business seem more than a little daunting after Konrath’s whirlwind tour.

Over the last two years, I’ve read lots of books on the publishing business, and this one has the largest volume of useful information. Sure it’s mixed with a lot of random other stuff and considerable repetition. But a must read. Just skim the parts you don’t need.

Any business is about the flow of money. This is a keystone for understanding them. Dean Wesley Smith, one of self-publishing’s very vocal bloggers has an excellent article on the subject of the differing flow of money in both the traditional and self-published worlds:

But so many of the discussions about indie publishing vs traditional publishing don’t take into account a very important, and sometimes critical aspect of money for a freelance fiction writer. And that’s timing of the cash flow. In other words: How Much? And When?

And trust me, this is complex and will seem odd to many, especially newer writers. But I will do my best to be clear and let you each decide on the path that is right for each of your books. And when you do decide on a path, you might understand the cash flow of that path.

–-Both traditional and indie publishing have time lags in the money.Indie publishing, given the same quality book, the same level of cover, is a much shorter time lag. And with indie publishing stores reporting in so many different ways, it takes some work to see how many books in a certain time period a book actually sold.

For example, if an author had a book up and wanted to see how many copies the book sold in January, the author might have to wait until June to get some of those exact numbers.

However, discovering sales is far worse in traditional publishing. There the author is lucky to be able to figure out royalty statements for how many books sold and were held as reserves against return in a six-month period a year after publication. And that’s if the author can get the agent to send the royalty statements.

At least with indie publishing, with a little patience, an indie author can find out how many books sold exactly in any given month.

For more of my posts on writing, click here. 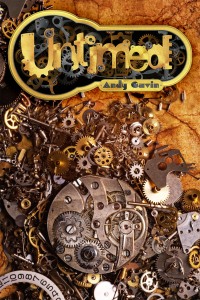 So I’m about halfway through my last polish pass on my third major draft of Untimed. [Update 7:44pm, finished the polish] This is one of the umpteen revision passes. Only another day or two to go before I send it off again and get down to waiting for feedback (hands down my least favorite part of writing).

Anyway, this has me planning to spend my “downtime” (waiting) doing some really serious research on self-publishing my first novel, The Darkening Dream, and seeing if I can get it out there before the holiday season.

I’ve been following self-publishing blogs like A Newbie’s Guide to Publishing and Dean Wesley Smith for around a year. These guys — rhetoric aside — have made sense for some time but the arguments for traditional publishing grow lamer and lamer. Check out something like this, which lays it out there — albeit with a lot of flavor. Publishing is in the throws of the cataclysmic “doing digital” change that has or is shaking up all the media businesses. For example, in music the conversion from media (vinyl, cassette, CD) to MP3 during which the labels/studios stuck their head in the sand and found themselves nearly destroyed.

The fact is, the change is coming no matter what any big old-school companies want or try to do. Readers are well on their way to embracing ebooks, the rise of the tablet (aka iPad), and dropping smartphone and reader prices (order your Kindle Fire here! 250,000 preorders in 5 days!), has etched the writing on the wall (in blood). In a few short years print will make up 20 or less percent of the market. Paper books (and I say this as someone who has a two story library with over 15,000 of them!) aren’t going to vanish instantly, but they won’t be majorly relevant for novel sales.

So this basically guarantees completely and without any doubt that print revenues will crater, leaving publishers unable to support their big overheads. Borders (and nearly every independent) going bankrupt will just hasten this. Barnes and Noble is next. They tried with the Nook, but Amazon is going to crush them (again, Kindle fire, not to mention $79 regular Kindle). And publishers, being large old-school companies that employ LOTS of people under the old model are showing lots of signs of panic, but pretty much not a glimmer of adapting to the changing business.

But they won’t have one soon. Because without control of the gates to bookstores, they don’t control anything.

Right now they still make the better product. But as an author they:

4. charge too much for ebooks

5. don’t actually do any marketing

6. often have really stupid ideas about “marketability” (like “sex doesn’t sell” or “vampires are over” *)

Eventually new meaner leaner packaging companies will make the murky ground of processing books a bit easier, but in the meantime. Time to get researching.

If anyone knows a kick ass indie book marketer, I’m looking to hire one (that’s the only part I can’t really do myself).

* From above: The Vampire Dairies and True Blood both prove both statements simultaneously asinine. And while TDD does have a vampire, he does not ever sparkle in daylight (900 years and he hasn’t seen a glimpse of it) and he is not in the least sexy. He is, however, frightfully smart, cautious, and happy to decorate your house with the entrails of your closest family members.