This novel has the amusing premise of taking the straight up traditional noir detective novel, like The Maltese Falcon or The Big Sleep, and giving it a modern paranormal spin. Now it isn’t the first book to do this, Laurell K. Hamilton‘s Anita Blake series is more or less on this model, but Butcher clearly read his source material.

It begins with the detective (ahem… wizard) in his office, and the case initiated by the lip chewing lady. Lets first address the success of this book as a piece of entertainment, then we’ll get into it’s loyalty to it’s sources. The book works. It’s a very fun read, catches you early on with the voice, and moves along at a good clip. I’d have sworn it was 250 pages and not 384. It has it’s flaws, but it’s fundamentally a good piece of entertainment. Compare to the somewhat similar Dead Witch Walking which I started recently but stopped halfway.

The voice is fun. Hardboiled, but not nearly as much as Dashiell Hammett‘s masterpiece upon which it seems loosely modeled. Harry Dresden (the wizard/detective protagonist) is observant and engaging, but he lets you know through interior monologue what he thinks about the situation. True hard boiled only implies or tells just a little. They remain much more oblique in terms of the character’s inner life, despite being first person. Now given that there’s a lot of magic and supernature creatures in Storm Front, being upfront probably helped the clarity. Even if it did occasionally leave me with a tiny feeling of too much TELL. The prose is pretty witty too — again not Hammett witty — but good, and very clear.

The characters varied from excellent (Harry, Bob, the mob boss) to just fine. The villain was kind of weak. Actually more than kind of weak. Fairly cardboard. Morgan (the memory of the White Wizard’s council who watches our hero) was a paper thin twerp too. The plot had plenty of good elements, and moved like lightning, although at times it felt contrived to keep Harry in maximum jeopardy. There seemed no reason he shouldn’t have trusted his police partner a bit more, as the only thing doing so would have cost him is a lot of worry and a whole lot of bruises.

The magic system and supernatural creatures were good too. Handled with a deft brevity as this book has plenty of creatures: vampires, fairies, wizards, etc. but they didn’t bother me — and I’m picky here. Although only the amusing little fairy stood out. A lot (like the vampire) were used jump because. The feel of many elements, like the potions and the fairies, was a bit tongue and cheek, but fit.

True to it’s noir roots, the book is pretty dark, with grisly murders and (off screen) sex. But by being supernatural, and more importantly campy, it looses that black edged moral ambiguity that the best classic noir had, making it just a fun read, free of any real comment on the human condition. 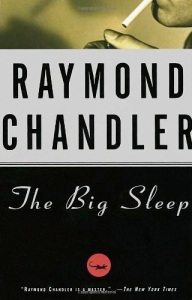 Continuing my between the wars “hard-boiled” novel kick, I followed up on The Postman Always Rings Twice and The Maltese Falcon with The Big Sleep.

The novel is very much influenced by Dashiell Hammett‘s classic. It shares the atmospheric quality, complex plot, moral ambiguity, and dark wit.  Stylistically The Big Sleep has slightly more straightforward and less quirky prose. It’s a little more wry, a little less over the top than the earlier novel. Both have extremely compelling voices and stark style. The lean irony of the narrator in the The Maltese Falcon gives way to the dark cynicism of Sleep‘s Marlowe and his first person voice. “If you can weigh one hundred and ninety pounds and look like a fairy, I was doing my best,” is a typical zinger. The dialog is fantastic, although not as oblique and contrary as in Falcon. It’s a little more natural.

Marlowe is more likable and less belligerent than Sam Spade, although they’re both minted from the same cool-cucumber tough guy template. The plot is involved, and to tell the truth even having seen the movie twice, I had no idea until the end what Marlowe was digging at with his investigation of Vivian’s missing husband. Occasionally some bits of action took me for a loop too, requiring that I reread them to find out exactly what happened. But these are minor complaints. The book really is great. Marlowe’s compelling voice pulling you through at breakneck pace. But at the backbone for me was the sinister portrait of pre-war L.A. While visually tame by today’s jaded standards, this is a dark book, with realistic characters. The movie is forced by 40s standards to gloss or smooth over many of these darker elements, but the novel exposes them for what they are.

I do have to say that these hard boiled detectives are awfully confident in their ability to read dangerous situations!