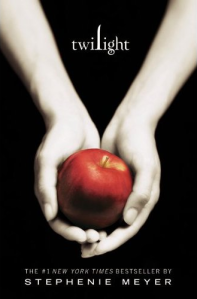 Since I’m such a vampire fan, having seen or read vast untold volumes of the stuff, I thought I should put my formal two-cents in on the strange source material that spawned the Twilight phenomenon.

First the book. I read it before the movie came out. There was a lot of buzz about it already, and I was excited about it. Generally, things that are really popular have a kernel of quality about them, and I love vampires and teen heroines. Buffy the Vampire Slayer is my favorite TV series of all time — I will blog about it one of these days. So I started reading Twilight in the Vegas airport while waiting for a flight. Despite the clunky prose (more on that later) I was actually pretty engaged in a low key way during the first half. Then Edward revealed to Bella that he was a vampire (not that I didn’t know) and the whole thing went to shit. I had to force myself through most of the rest, and the ending left me baffled. “Wait, where’d the fight go?  What about the climax?”

Back to the writing: It’s really clunky. I won’t go into too much detail, this other blogger did. But let me say Meyer is the anti Cormac McCarthy (I’m in the middle of The Road right now). He eschews punctuation, she loves it. Every long improper sentence is peppered with a random assortment of commas and em-dashes. She adores the em-dash, using it in approximately 50% of sentences, and usually not for its proper purpose of offsetting a parenthetical. Maybe she felt she had too many commas (she does), and needed to replace some of them with em-dashes for the hell of it. Oh, and she loves certain words or word combinations, like “cold fingers” and uses them several times a page in places. And she clearly choses random synonyms from the thesaurus without being aware of the connotations of said words. For example: “His expression shifted instantly to chagrin.” Can the word be used that way? I don’t think so. But none of this really matters when reading the book, you adjust and just role with it. I guess if you’re 14 and haven’t read a lot you don’t notice to begin with.

The plot and content: Given what actually happens in the first book, it’s pretty long: 118,000 words. Not much really does happen. We have a LOT of words devoted again and again to how pretty Edward is and how much Bella loves him. This isn’t really SHOWN too much, or justified, but she sure TELLS us about it a lot. But again, the first half was okay. However, once the reveal came in, it gets really silly. Basically they go play this ridiculous baseball game and the Black Eyed Peas (oops, I mean the evil vampires) walk onto the field, sniff Bella, and decide the most important thing in the world is to sink their fangs into her blood. There is no real attempt to sell anything in this plot, to provide any believable reasons, it just happens. You couldn’t possibly have more one dimensional villains — although they do compliment the one dimensional heros nicely. Then my all time biggest gripe, we close in on the unbelievable “final” confrontation of the book and Bella gets knocked unconscious (she is after all the narrator) and we miss the whole thing. It’s told to us by Edward after we know it came out okay so as to minimize tension. I had the feeling that the author didn’t know how to write an action scene, so she just chickened out.

The vampires: Oh my. It’s totally clear (particularly in later books) that Meyer doesn’t do research. This includes even watching a few vampire films or perhaps reading Dracula. Her undead aren’t really vampires, or even undead, except for being immortal and having a taste for blood, and “cold fingers.” They don’t seem dead, or particularly evil. They sparkle in the sun, they apparently have like, oh my God, no real weaknesses. And they’re all really pretty. We hear about that a lot. Let’s not forget their smorgasbord of cool psychic powers like seeing the future, and reading minds. These make hack plot construction really convenient. I actually started my novel a year before even hearing of Twilight, but reading it certainly motivated me to make sure my vampire heavy was a really bad-ass undead in a nasty evil way. He doesn’t sparkle in the sunlight but he will leave your entrails hanging from a tree to make a point — and he certainly wouldn’t ever concern himself to learn current High School vernacular.

Publishing mystery: Twilight had a very aberrant publishing history. As a first time novelist it was picked up by Jodi Reamer of Writers House really quickly. This is a very prestigious agency and that’s very rare. It was then sold quickly to a great publisher for a really huge advance. That Reamer showed interest in it is not what surprises me. There is a mysterious something about the first half of the book — it had potential. But what surprises me is that it was never edited — or if it was I’ve never heard of an editor that lax. The standard length for YA books is more like 50-70k, and there is a LOT of fluff in the book, not to mention the bad grammar and the flaccid ending that would be easy to fix. Having been through rounds and rounds of revision myself, the book was held to none of the standards my editors have exhibited. Of course it turned out to be a great decision for Jodi, but I still don’t understand why it was never edited.

The movie: Catherine Hardwicke directed the first movie. She actually did a really good job with the source material, and I think the movie is actually better than the book. Not exactly great, but better. The casting was excellent, particularly Kristen Stewart who does have a soft charisma, and she’s hot in a non obvious way. If you see her in some of her other films like Adventureland or Speak you realize that she’s actually a very fine young actress in certain roles. Twilight doesn’t provide a lot of room for subtle acting. I myself had casually known Hardwicke from when she did production design for Insomniac’s Disruptor in the mid 90’s (Insomniac was located next to my company Naughty Dog in those days). So I’d noticed when she started directing with Thirteen, which is a depressing but brilliant movie — particularly given what must have been a VERY low budget. Hardwicke brought the same kind of hand-held-documentary style to Twilight, and it worked well to offset the inherent cheese factor of the material. Not totally offset, but the result was somehow watchable. She did a nice job capturing Bella’s POV. This is tricky because in a novel, particularly a first person one like Twilight, so much of the book is dominated by the voice. With a combination of diary style voice over (more-or-less quoted from the book) and a peeping-over-the-shoulder viewpoint (as also used in Thirteen) Hardwicke pulls it off. For some reason, they ditched her with regard to directing the sequels, and the those devolve into further cheesiness. Of course so do the later novels. Can I just say Volturi?

Conclusion: I’m kinda baffled. Twilight isn’t particularly good, or well done, but it does have a certain appeal. However, the overall magnitude of success has left me totally confused. Harry Potter is ludicrously popular, but at its core rest three stunningly good initial books. The first book is really well written, the central premise is very novel and sold with incredible style. Even the ridiculously melodramatic Vampire Dairies is more fun than Twilight. I’m just left scratching my head and hoping the anti-vampire backlash isn’t too bad.