Season 3 continues to groove on the rhythm established in season 2. There aren’t any big shake ups in the formula, but by concentrating on the mob action and the relationships, it remains outstanding. There is, I think, a slight notch up in the humor. While things maintain a pretty serious level of violence, some of the episodes just seemed a bit funnier in a clever understated way.

The season starts off with the highly amusing and stylized efforts of the FBI to bug the sopranos house — really a clever reintroduction to the characters in disguise. Joe Pantolanio shows up to give us Ralph, the guy who Guido the Killer Pimp grows up to be. He serves to replace Richie as Tony’s designated pain in the ass. He’s funny (and tragic, but not for him), but he isn’t quite as interesting a figure. Mom takes a most appreciated (I found her funny but annoying) permanent vacation. There are arcs with Meadow at college and her boyfriends, with Jackie Jr, with Dr Melfi, with Christopher.

Structurally this arcs are more spread out, crossing most of season, or at least several episodes. This isn’t yet The Wire or Game of Thrones where the episodes are just arbitrary blocks of a much longer story, but it’s getting closer. Still the sense of a bigger arc for the entire season is more muted than in season 2 (where the dual “Big Pussy as informant” and “Richie makes trouble” arcs served to anchor the season).

There are some good shocker moments too like in “Employee of the Month.” I also really enjoyed the gang antics in “Pine Barrens.”

The dominant theme continues to be the co-existence of family and personal life with violence. The balance of this rather realistic portrayal and dark humor is as pretty fucking brilliant. Despite the comedy and violence, the characters feel very very real, and I think that’s the secret of the show’s success.

Also interestingly, each season ends with an Aprille death. Although the last episode is a bit of a letdown.

For my review of season 1 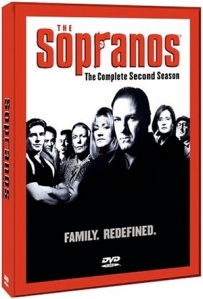 With season 2, The Sopranos takes the formula they successfully developed in season 1 and really notches it up.

While the foundation of fun characters is great, fundamentally I think the improvement has to do with a slight toning down of the comic element (it’s still there, just slightly muted), and a concentration on the mob aspects at slight expense of Tony’s maternal and psychiatric relationships. It’s not to say that any major elements changed, the writers merely tuned up the balance.

The mob stuff is great this time around. First of all, we have a lot more violence. It actually feels pretty real. This underscores a fundamental aspect of the show, in that we are made to become very fond of a bunch of “cold hearted killers.” I’m not personally sure that this is unrealistic because everyone’s the hero in their own story. In any case, there are some great episodes here.

I particularly enjoyed “Commendatori” in which Tony, Chris, and Pauli go to Napoli for a little pow-pow with some old country gangsters. Having spent some time in Naples, this is extremely well handled, showing off that ancient city’s blend of violence, seediness, and beauty. “D-Girl,” is another really fun episode. This is predominantly a Christopher show, and in the first season his subplots were dull, but maybe it’s just living in Hollywood, or perhaps that I know Jon Favreau myself (he’s a friend of a friend), but I found it sexy and amusing.

A few new characters spice things up. I’m not that big a fan of Tony’s sister Janice, but Richie Aprile is awesome. Channeling a very short Al Pacino, he’s quite a character. This couple follow in Tony’s Ma’s tradition of stirring up trouble, both serious and comic. It all gets a little twisted — particularly his mafioso-style bedroom fetish.

Particularly in the first half of the season, there isn’t much for Dr. Melfi to do, and during the second she arcs in a way I didn’t find realistic. Family life and relationships are still paramount, but juicing up the crime intensity a bit, I felt improved the balance, moving things closer to the modern HBO style of great writing, great action, and shock.

For my review of season 1, see here.

For my review of season 3, here.

ps. What’s up with Meadow’s weight? It bounces around like a super ball. The rest of the cast (except for Christopher and his Jersey girl fiance) mostly stay what most of the characters would call, “fat fucks.”

For whatever reason The Sopranos remained the only real HBO drama that I hadn’t seen. I’ve been a huge  HBO original programming fan as far back as Dream On, but I just never got around to Tony and crew.

It’s interesting to see it after the fact, after having watched Rome, Deadwood, Six Feet Under, Carnivale, True Blood, The Wire, Big Love, Game of Thrones, Boardwalk Empire, etc. This is an intermediate stage in the development of today’s long form visual medium. The Sopranos, like all HBO dramas, is very well written. Where it shines is in character building. Not development per se, but in the creation of unique and interesting personalities. The casting is spot on and nearly every member shines as distinctive and amusing individuals. But inherently, this is a recipe HBO has really mastered, blending casting, writing, and acting to make seamless characters.

It isn’t (in this first season) as well plotted as some of its sucessor shows. Less happens, and the events are a bit less dramatic. This isn’t to say that nothing’s going on, but we don’t have the momentous and shocking events every fifteen minutes that are the hallmark of the mid 2000s shows. I suspect later seasons may grow into this. The net net of this was that I wasn’t quite as riveted by the events, and certain subplots dragged, but the characters certainly kept me watching.

There is something to note here, which is the odd dichotomy of the like-ability of most of the cast and their “trade” as cold and murderous mobsters. The show strikes a slightly comic and not entirely realistic tone with regard to this, making it easier to disregard the violence and keep on liking them. And like them I certainly did, particularly Tony. James Gandolfini shines in this role, nailing his particular brand of goomba charisma. His mother is perfect too (although fun to hate) as the manipulative bitch that she is.

I was also a bit ambivalent about the central premise of the mafia boss in psychotherapy. Although I did like the shrink, and I liked the amusing way in which Tony would sometimes describe a happening in mild mannered terms while the visuals showed it “the way it really was.” I often enjoy this this sort of humor. At times the overall conceit felt a little forced, but it basically works.

So I’ll start in on season 2, particularly as I’ve heard the series only gets better.

For my review of season 2, see here.

Check out my review of Game of Thrones.