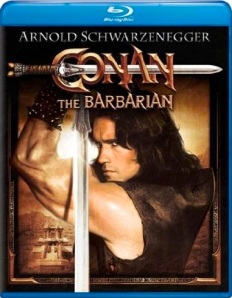 Summary: Still one of the great fantasy films

In honor of the upcoming remake of this classic, the  release of the blu-ray, and the political demise of its star, I decided to rewatch this for like the 10th time — I think the last time was in 1997.

During the long long dark ages of fantasy filmmaking, before the wonder that is Peter Jackson’s Lord of the Rings, or the epic new HBO Game of Thrones, we fantasy fans had to be content with a sorry set of films indeed. Above the pathetic likes of Willow and Krull, the 1982 Dino De Laurentiis epic starring the pre-Terminator Mr. Universe was high art indeed. In fact, it’s pretty much hands down the best High Fantasy film prior to LOTR.

Technically, the blu-ray isn’t radically better than the DVD in the picture quality department, although it looks good. There is some film grain from the era, and the movie has a lot of contrast which strains my plasma (I need to get an LCD or good new projector). The sound needed a major new restoration it didn’t get, it was pretty terrible. Which is a shame given the spectacular score. Nevertheless, none of this takes much away from the film.

This movie has blood, guts, and tits, snakes, swords, cannibals, wizards and all that long before HBO. Gotta love it. The period head-banger stylings of everyone, particularly the bad guys are great fun.

I love this trio of baddies. Check out heavy metal guitarist Nigel Tufnel on the right. Love him. And James Earl Jones is fantastic as cruel neo-hippy-killer Thulsa Doom. “Steel is week, flesh is strong!”

This movie feels big. It uses wide open location shots in Andalusia Spain to good effect, big sets, and crazy costumes. It’s just plain unabashed. Sure the dialog is laughably cheesy and the script ham-handed. Transitions are abrupt and there is little to no character development. But there are great lines like “time enough for the earth in the grave” and Atilla the Hun’s stolen quote, “To crush your enemies, see them driven before you, and to hear the lamentation of their women.” All good stuff.

What’s also very interesting is the forgotten style of epic storytelling, which has more in common with Lawrence of Arabia than it does with modern action crap like Transformers. This film has long Easy Rider style travel scenes with just the thunderous score and more interestingly, several almost ballet like giant action numbers with an operatic orchestral quality. These scenes, notably the raid on the Conan’s village, the assault on Set’s tower (awesome!), and the war-painted invasion of the cannibal Mountain of Power (more awesome!), have virtually no dialog. They have muted sound effects, but predominantly the mood is set with the booming orchestra and the intricately choreographed action, swaying as it does to the hypnotic score.

Peter Jackson knows his fantasy films, because he borrowed heavily from this in his own epic. Think the Black Riders at the Bree ferry, or the long descent to the bridge of Khazad-dûm. All favorite scenes of mine.

Michael Bey, eat your heart out!