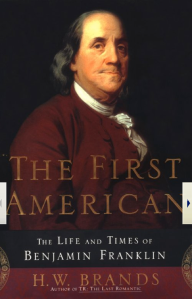 Title: The First American: The Life and Times of Benjamin Franklin

While I’m waiting for the last bits of line editing on my almost-finished novel, The Darkening Dream, I’ve been researching and outlining the  next. Given that it’s me, the new novel features both the historical and the fantastic. As to the historical: enter Ben Franklin. Who was one cool dude.

There’s a reason why he’s on the hundred dollar bill.

Now to reviewing this biography (I’ll call it TFA). It’s very well written, and easy enough to read. It’s also LONG (800 dense pages). Now, Ben lived 84 years, from 1706 to 1790, and he was perhaps the best known and most highly diversified American of his era. So there’s a lot to cover. As a printer/writer Ben left us a lot of his thoughts, and the book does a tremendous job capturing these, with long tracks of his writing embedded in the text. Lest you think this might be dry, he’s a surprisingly witty and modern voice. Eerily so. The book could have used a little bit of trimming here and there — but no more than 5-10%. It marches along steadily from Ben’s parents to his death and legacy, covering everything in between. This is not a history of the Revolutionary War, but covers more Ben’s role than the conflict itself. Good thing since that would’ve doubled the size. TFA does a good job characterizing the era, and particularly the politics of both Pennsylvania and London, and to a lesser extent Paris. It does a great job characterizing Ben.

Overall, I would give the book a 8/10 on the biography scale. That’s independent of it being Ben, but just in managing the job of conveying an important life in a different era. It’s not quite as good as Caesar: Life of a Colossus, Alexander of Macedon, or the Rise/Reign of Napoleon Bonaparte, but it’s pretty close.

But it’s worth talking about Ben. He was a pretty amazing guy, as influential in his own wry was as those three aforementioned titans. And he didn’t kill thousands or conquer nations doing it. Ben was a man of rare genius. Observant as to causes and effects, be it weather, electricity, ocean currents, politics, or business. And he’s depicted here with all his very human faults. But fundamentally he was a spirit of curiosity, optimism, energy, and general good intentions. He wasn’t the best husband or general, but he sures seems to have been one hell of a human being.